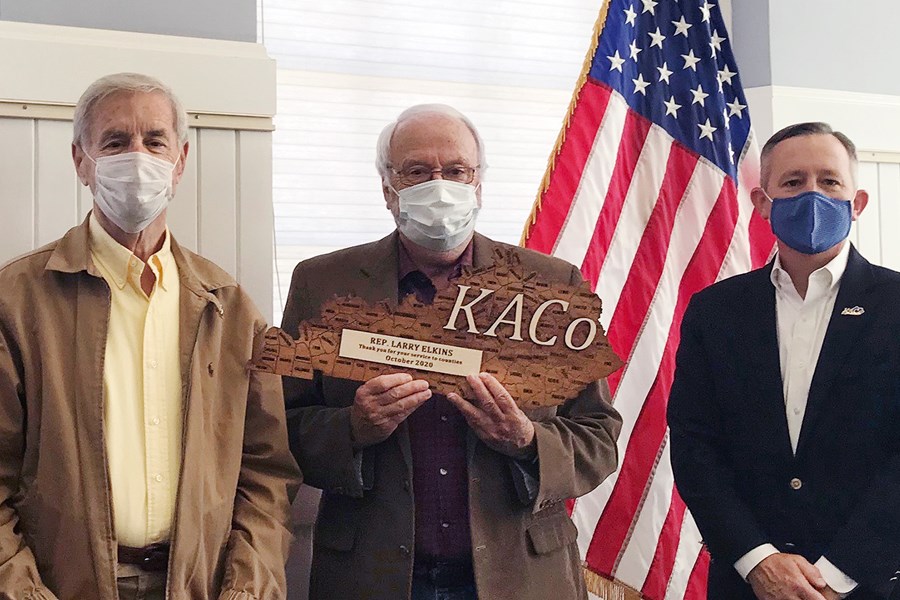 The KACo County Advocate award is presented to retiring lawmakers who have made outstanding efforts in the General Assembly to advance Kentucky’s counties through the lens of their prior experience as county officials.

State Rep. Larry Elkins, who is a former Calloway County judge/executive, recently received the Kentucky Association of Counties (KACo) County Advocate award from Executive Director Jim Henderson to thank him for his leadership and commitment to promoting county governments across the state as he prepares to retire from the General Assembly.

“I want to express my personal appreciation to Judge Elkins for his willingness to serve as our State Representative following his long, dedicated service as Calloway County judge/executive,” said Kenny Imes, who currently is judge/executive in Calloway County. “His knowledge of county government allowed him to actively support legislation that represented the best interest of the citizens of the Commonwealth, as well as the vision and work the Kentucky Association of Counties does for our counties. This award is well deserved.”

Elkins has a long history of public service, most recently his term in the state legislature representing Calloway and Trigg counties. In the House, he serves on Agriculture, State Government and Local Government committees.

As a state representative, Elkins helped counties by supporting pension relief and state budget appropriations to counties for services. He also sponsored the bill to modernize the options available to counties when divesting of county property.

Elkins served as Calloway County judge/executive from 1999-2018 and prior to that in law enforcement for 24 years, including five as Murray police chief.

“It has been an honor to serve the people of the 5th District in the Kentucky State Legislature,” Elkins said. “I have enjoyed working with KACo and supporting legislation that is important to county government and the citizens (it serves). I will miss seeing staff (members) on a regular basis. I have made wonderful friends. I appreciate the recognition.”

“On behalf of KACo and all county officials, we wish Rep. Elkins all the best in his future,” Henderson said. “While we will miss having him as a voice for counties in Frankfort, we know he will find ways to continue to serve his community while devoting more time to his family.”