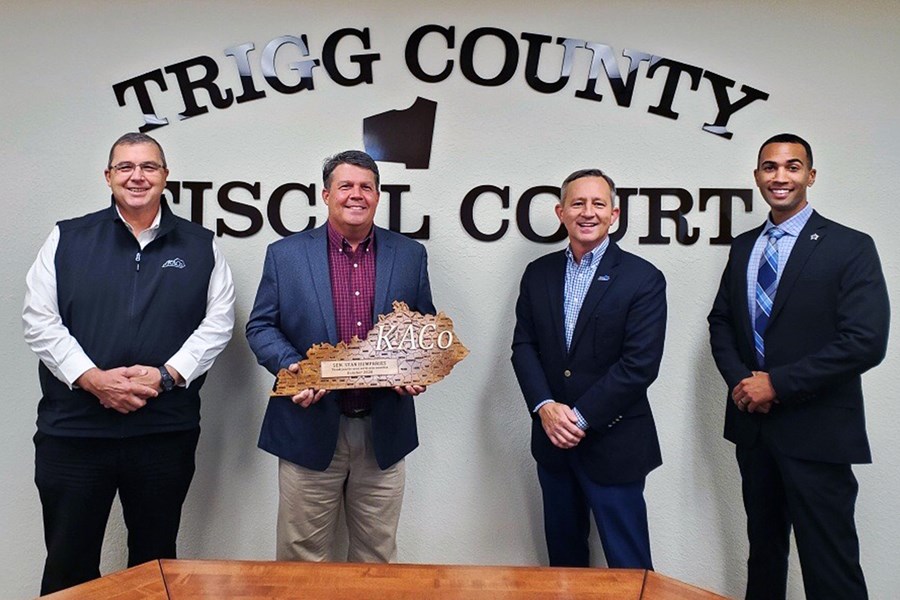 KACo County Advocate awards are presented to retiring lawmakers who have made outstanding efforts in the General Assembly to advance Kentucky’s counties through the lens of their prior experience as county officials.

The award honors Humphries for his leadership and commitment to promoting county government across the state as he prepares to retire from the General Assembly.

“We truly appreciate Senator Humphries' service and leadership over the past eight years, as well as his advocacy for KACo in the interest of counties for the entire state,” Trigg County Judge/Executive Hollis Alexander said. “His overall knowledge of county government and the legislative perspective was truly a benefit to each of us and will be missed greatly.”

Humphries has a long history of public service, most recently in the Senate representing Calloway, Fulton, Graves, Hickman, Lyon and Trigg counties. In the Senate, he serves on the Agriculture, Appropriations, State and Local Government and the Veterans, Military Affairs and Public Protection committees.

Counties are especially grateful to Humphries for leading a major economic development bill through his chamber that secures funding for the 37 Kentucky counties served by the Tennessee Valley Authority. That legislation will pay dividends for the residents and businesses in those counties for decades to come.

Prior to his service in the legislature, Sen. Humphries served as Trigg County judge/executive from 2006-13. As judge/executive, he was elected by the county officials in his area development district to represent them on the KACo Board of Directors in 2011 and 2012.

“It was certainly an honor to be recognized by KACo with this beautiful handmade piece for my years of service,” Humphries said. “While serving as county judge/executive and in the senate, I always desired to help people locally. As this association knows, that’s not always easy to do, but we try to make sure our constituents and counties are cared for properly. This beautiful gesture will serve as a reminder to me in the years ahead that I got to do something that I enjoyed greatly, and that was helping and serving my friends and neighbors.”

KACo County Advocate awards are presented to retiring lawmakers who have made outstanding efforts in the General Assembly to advance Kentucky’s counties through the lens of their prior experience as county officials.

“On behalf of KACo and all county officials, we wish Sen. Humphries all the best in his future,” Henderson said. “While we will miss having him as a voice for counties in Frankfort, we know he will find ways to continue to serve his community while devoting more time to his family and his farm.”