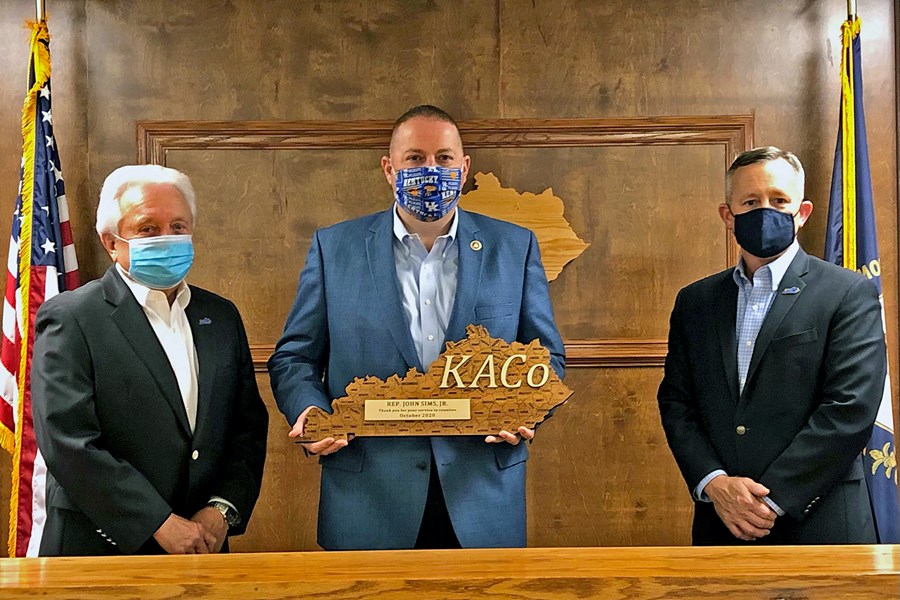 Sims honored for years of service

The Kentucky Association of Counties (KACo) presented former Fleming County magistrate and current State Rep. John Sims Jr. with a County Advocate award, recognizing him for his leadership and commitment to promoting county governments across the state as he prepares to retire from the General Assembly.

“On behalf of KACo and all county officials, we want to present this award to Representative Sims for his dedication to his county government roots while serving as a state legislator,” Executive Director Jim Henderson said. “He is highly respected among his peers in the General Assembly, and he has been an outstanding county advocate on legislative issues. We are indebted to him for his consistent efforts on behalf of his district.”

"On behalf of the Fleming County Fiscal Court, I would like to express our sincere thanks and appreciation to Representative John Sims Jr. for his dedicated service to the 70th District and Fleming County,” Foxworthy said.

Sims’ history of public service began 10 years ago. He was elected Fleming County magistrate in 2010 and again in 2014.

He successfully ran for an open House seat in 2016 and was re-elected in 2018 to represent Bracken, Fleming, Mason and Robertson counties. In the House, he serves on the following committees: Licensing, Occupations, and Admin Regulations; Education; Agriculture; Appropriations and Revenue and Local Government.

“It has always been a pleasure to work with KACo trying to improve the workings of county government,” Sims said. “KACo is a first class organization that brings all county officials together for one voice.”

“We wish Rep. Sims all the best in his future,” Henderson said. “While we will miss having him as a voice for counties in Frankfort, we know he will find ways to continue to serve his community while devoting more time to his family and his business.”