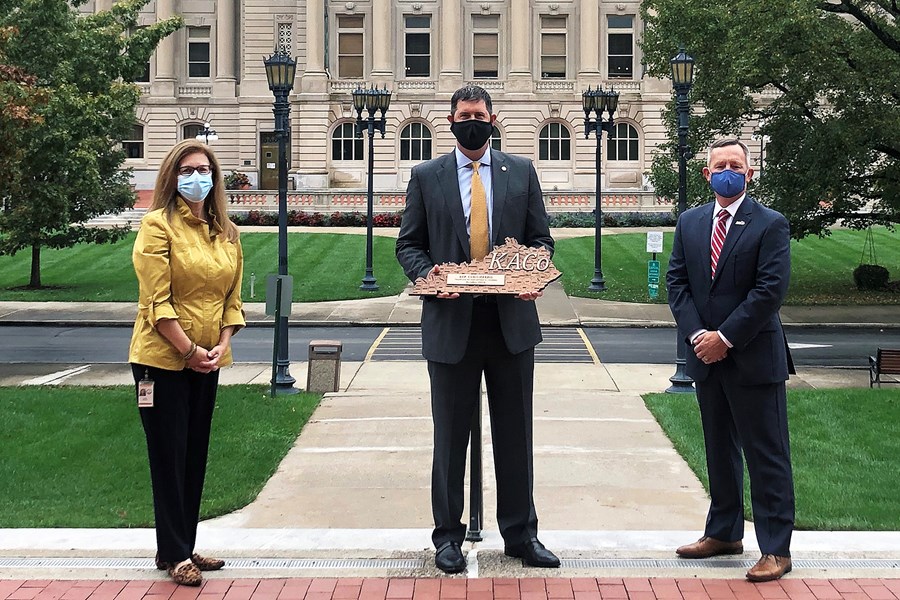 Harris honored for years of service

The Kentucky Association of Counties (KACo) presented former Pike County magistrate and current State Representative Chris Harris with a County Advocate award, recognizing him for his leadership and commitment to promoting county governments across the state as he prepares to retire from the General Assembly.

“On behalf of KACo and all county officials, we want to present this award to Representative Harris for his dedication to his county government roots while serving as a state legislator," Executive Director Jim Henderson said. "He is highly respected among his peers in the General Assembly, and he has been an outstanding county advocate on legislative issues, both as a former KACo president and now a member of the House. We are indebted to him for his consistent efforts on behalf of his district."

Rep. Harris’ history of public service began 20 years ago as a Pike County magistrate, an office he held for 14 years. During that time he was elected to the KACo Executive Committee, serving as president in 2011. He also served on the KACo Insurance Agency Board from 2010-13 and was chosen as its chairman from 2010-11.

He served on the KACo Workers Compensation Fund Board from 2008-14, including his role as vice chair from 2011-13.

He successfully ran for the 93rd district House seat in 2014 and was twice re-elected to represent Pike and Martin counties. In the House, he serves on the Judiciary, Agriculture and Transportation committees.

“It’s been my honor to serve the people of the 93rd district, and I want to thank KACo for this recognition," Harris said. "I had the privilege of leading my fellow county officials as a KACo president and have friendships from all over Kentucky that began from that experience. Counties are the foundation of our state, and KACo is there to support all county officials in their roles as public servants.”

“We wish Chris all the best in his future endeavors," Henderson said. "While we will miss having him as a voice for counties in Frankfort, we know he will find ways to continue to serve his community while devoting more time to his family and law practice."